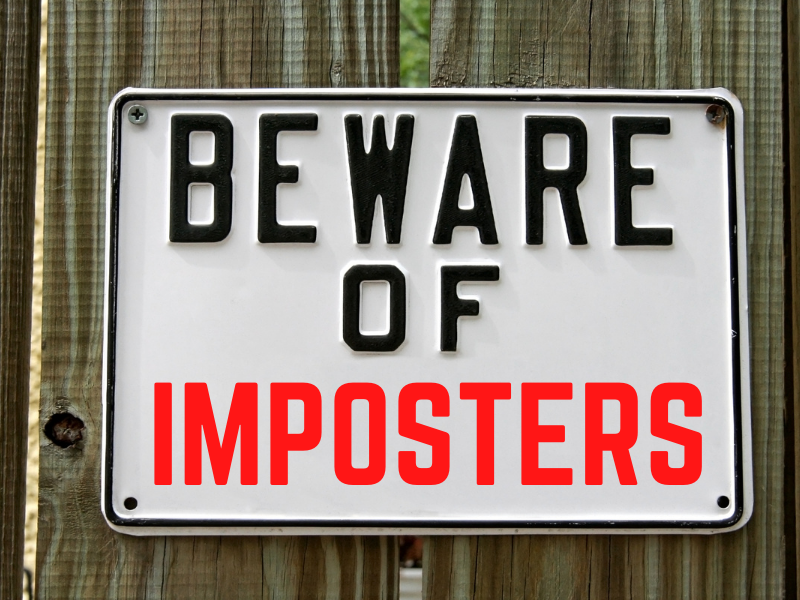 Better yet, IMPOSTERS BEWARE! You have been warned. In last Friday’s blog post (Blogging Truths Be Told: Don’t Play the Blogger Imposter), I mentioned that, in today’s discussion, I may not be as nice (as I was last week) about the whole topic of “identity theft”, one of the more prominently shady activities a blogger imposter carries out when playing the role of someone he or she is not. And guess what? I’m not going to make the blogger imposter comfortable in this blog post. No, not at all.

I’m talking to and about ALL blogger imposters out there from the ones who take on someone else’s blogging persona that already exists in real life to those who make up fictitious blogging personas altogether. It’s pretty much the same beast we’re dealing with but from two different angles. Either way, the two types of blogger imposters are in the business of stealing the blogging credit of someone else (real or imaginary).

And so, how exactly does the credit-stealing aspect of the blogger imposter come into play?

Well unfortunately, it just naturally occurs whenever a blogger publishes content on his or her blog that’s really the brainchild of a fellow blogger or that’s totally made-up commentary that refuses to let the reader in on the blogger’s true human character, thoughts, emotions, outlooks, personality, experiences, viewpoints, and opinions.

. . . because the focus of this discussion on the blogger imposter’s credit-stealing ways takes me back to a previous blog post of mine that draws attention to the unsavory characteristics of the misguided worker.

Check out this excerpt from The Art of People Business – The Misguided Worker Mentality (Part Two), which paints an ugly picture of what a “Credit-Stealing Worker” looks like. And here we go . . .

Are you kidding me? Do we actually have people that go around taking credit for other peoples’ work? Sure, we do. Unfortunately, it happens all too frequently. And, how do these offenders think that they can constantly get away with high-jacking someone else’s efforts? Well, nobody stops them, so they keep doing it. That’s my guess, anyway.

It seems like the human race has encountered this worker throughout the ages and the residue left behind can take on several forms. Most commonly, this worker’s activities (or lack thereof) look a lot like cheating, stealing, and lying in a myriad of forms such as:

Sound like someone you know? Perhaps you, even? (This is a rhetorical question that doesn’t need to be addressed publicly, so no need to provide an answer in the comments. Just ponder over today’s questions in the confines of your private thoughts just like all the questions I posed to you in last Friday’s post.)

And with that being said, let’s pause here a minute to address the elephant that just suddenly appeared in my room. In case you thought of accusing me of credit-stealing by using this excerpt from a previously-published blog post, please remember that the previously-published blog post I just quoted from is 100 percent MINE for the claiming. So, you can’t accuse me of plagiarizing or infringing on someone else’s copyright. It’s all MY original stuff to freely reuse as much as I want.

And right there is the beauty of being true to who you are in your written content — you can’t credit steal from yourself. It’s virtually impossible to do so. YOU get the rightful credit for the work that you do when it’s your own. It’s YOUR very own brainchild — your human character, thoughts, emotions, outlooks, personality, experiences, viewpoints, and opinions written down on paper (or actually typed onto a computer screen).

ALL BLOGGER IMPOSTERS OUT THERE: if you’d be honest with yourselves, doesn’t it feel icky to write in someone else’s skin? I mean YOU are not the one ultimately receiving recognition for the work that you’re putting out into the blogosphere — the actual originator or the false identity is. Or put another way, YOU are receiving recognition for the lack of YOUR work that you’re putting out into the world. Hopefully, one, or the other, or both of the previous two statements make sense to you. Because ultimately, nobody wants to be made a fool out of. But you’re fooling yourself if you think that posturing is a guaranteed strategy that you’ll be able to benefit from for the long-term.

The fool is eventually brought to light in one way or another. It’s only a matter of time.

Who wants to live like that . . . waiting for the bomb to drop and break up his or her fairytale life?

And just in case I haven’t caught the blogger imposter’s attention quite yet, let’s just recap some of the previously-mentioned problems you create when you choose to credit steal:

JUST BE WHO YOU ARE, WRITE YOUR OWN STUFF, AND GET THE REAL CREDIT YOU DESERVE.

View all posts by degreesofmaternity